“Do the Stuff” | After Hurricane Maria, a Puerto Rican Pastor Moves Home

In the hurricane season of 2004, my family hunkered down in our Florida home as four hurricanes crashed through the state. One storm followed another, snuffing out our power for over a week and felling an oak tree above my sister’s room. The destruction was much worse for others. Still, help came for every Floridian who needed it.

The same cannot be said for our neighbors to the south.

In September of 2017, Hurricane Maria made landfall on the Caribbean island of Puerto Rico. The Category 4 storm killed thousands, left hundreds of thousands homeless, and devastated the island’s power grid, infrastructure, and economy.

Maria and its aftermath also sparked an unprecedented exodus from the island. An estimated 200,000 to 300,000 people have already left Puerto Rico and nearly half a million will be gone by the end of 2019. It is no wonder. Nearly a year-and-a-half after the storm, Puerto Ricans are still living without power, clean water, and a roof over their head. For many, hope itself has left the island—and people are following her lead.

The same day Maria made landfall in Puerto Rico, Carlos Rodriguez released his second book, Drop the Stones. The Puerto Rico native was living in Raleigh, North Carolina with his wife and two boys. Rodriguez had recently left his role as lead pastor at a prominent church to enter the world of book signings, speaking gigs, podcasts, and interviews. He seemed on the precipice of attaining the prominence longed for by so many Christian leaders.

While thousands are leaving the island, Carlos and his family recently packed up their apartment in Raleigh and moved to Vega Alta, Puerto Rico with Happy Sonship, the nonprofit Carlos founded. Shoulder to shoulder with local Puerto Ricans and partnering churches, the Rodriguez family is spearheading a rebuilding movement in Puerto Rico, one roof at a time.

Carlos isn’t getting as many speaking invites or interview requests as he was a year ago. There isn’t a Target, movie theater or urgent care clinic around the corner from his apartment like there was in Raleigh. Brutal humidity and spotty WiFi are always there to remind him that he is a long way from the comfortable life he walked away from. But he thinks more about what he’s gained than what he left behind. Describing life in community with their Puerto Rican neighbors, he reaches for words and settles on this: “There’s nothing like it.” For Carlos Rodriguez, there’s no place like home.

Was there a particular event or moment that led you back to Puerto Rico?

It was a series of moments. The same day I released my book, Hurricane Maria was coming to Puerto Rico, that very night. I had this beautiful book release in Raleigh. I’m thinking, “Here we go. This is book number two. I’m now entering this new world where I’m getting speaking gigs and invitations to do podcasts and interviews.”

A few weeks later I get a call from good friend who was a missionary in Dubai and he leaves me a message. He almost sounded angry. He said, “Carlos, don’t be a talking head. Don’t just fly around and tell people what to do. Do the stuff! Don’t get attractive. Sure, you’ll make money. I’ve done it. It’s useless. Do the stuff!”

That voice kept repeating in my head. As soon as Maria hit Puerto Rico, the country I was raised in, I knew—I can either go around the world preaching and writing more books, which is good, it is fine for some people—or I could do the stuff. I don’t want to preach about what God did twenty years ago or that one trip I did fifteen years ago. God is doing so much right now. There is so much need right now. There are so many injustices to address right now. So, less than three weeks later we were organized and every month I was flying to Puerto Rico with teams from conservative churches, liberal churches, nonprofits—it didn’t matter to me. If somebody was willing to help Puerto Rico I was going to be in Puerto Rico.

We were adopting our little girl from Ethiopia at the time and flying back and forth on these trips. I got a call to fly to Ethiopia from Puerto Rico and we knew. Once our family was complete, we just belonged here. We wanted to live as a family together amongst the need and the opportunity, the joy and the pain. It has been the greatest thing. To be able to live with the people we’ve been serving for a full year after the hurricane—there is nothing like it.

When James wrote, “Faith without works is dead,” he is immediately inviting us to think of the opposite: “When my faith is working I feel alive.” There is nothing like it.

“When James wrote, ‘Faith without works is dead,’ he is immediately inviting us to think of the opposite: ‘When my faith is working I feel alive.’”

What do you hope the people of Puerto Rico see when they watch what you are doing?

The beautiful thing about being here long term is that we don’t have to be flashy. The hope is to be family. We are asking how we can be family to the people who lost loved ones because of Maria or lost family to migration. Over half a million people have left the island for one reason or another. So [we ask ourselves], “How can we come here and be the family that they don’t have anymore?”

“The beautiful thing about being here long term is that we don’t have to be flashy. The hope is to be family.“

Since you’re Puerto Rican, I assume there aren’t many cultural barriers for you. Have you experienced any since moving back?

The fact that we didn’t experience the hurricane. There are people here with PTSD. The suicide rate here went from four people per week to ten per week and it has been consistently at that level since the hurricane.

The fact that I wasn’t part of that shared experience gives me the benefit of staying hopeful. At the same time, I don’t want to dismiss that people are still struggling. There has been an element of, yes, it’s my people, my culture, my language—but they are different because they went through this traumatic event.

What spiritual practices sustain you and direct your attention to God’s presence in the world?

The best thing that I’m doing right now that is helping me connect with God is reading the gospels. I’ve been on a gospel binge for the last few years. I just can’t get enough of the story of Jesus. There is nothing like reading about how he walked, how he loved, who he engaged with. Taking the time to read a story and sit with it and picture it and imagine it. I fall in love with Jesus’ intentionality. I like to picture [the story] in his time and then transpose it to the present. [Then I ask,] “How would that look in our time and in our context?”

How do you define advocacy, and what are tangible ways for Christians to practice it?

Advocacy is using my platform for the sake of a person or people group who is oppressed or marginalized, and allowing them to use whatever platform God has blessed me with. It is not speaking for them, but giving them a voice. It is a partnership; it is empowerment. Hopefully, the one who has the most privilege gives away the most power to those who are underprivileged so that they have more power.

One of the central motifs in Drop the Stones is unity. Why is unity essential for reformation to take place?

I think unity is the most obvious, yet most elusive, thing. The humility and understanding that my denomination, my branch of Christianity, is not the full expression of our faith is so necessary. There is so much beauty and so much richness in our brothers and sisters who are in different streams of Christianity.

From Catholics to Southern Baptists and all of the in-betweens, there is so much of Jesus. It’s an act of humility to say, “I don’t have the full picture. Where can I go?” And sometimes the best thing to do is go as far away as you can from what you’re used to. You end up discovering so much beauty, and so many things in common—which is great—and many things [that are] very different—which is even better. Because then you get to challenge your theology.

Being from Latin America, we have such a high value of family. I come from two people who were divorced. I’m the firstborn of both my parents’ second marriages. No matter how bad things were we were always family. Even my dad’s ex-wife was part of the family and my mom’s ex-husband was part of the family. When it’s time to get together, no matter how bad it is, we’re family. Obviously, there is need for boundaries, communication, and correction, but it is [also] about finding beauty in the mess. Because there is always beauty in the mess.

“There is so much beauty and so much richness in our brothers and sisters who are in different streams of Christianity.“

What piece of advice would you share with the next generation of reformers?

Do not doubt your frustrations. Do not try to quench your anger. Do not deny your questions. All that emotion that has come in the last two years—God is very comfortable with it. We have to tackle these things and allow the questions, frustrations, and anger to not become bitterness but to become the invitation from the Spirit to move on to what is next. The new wine is tasty. We just need new wineskins. 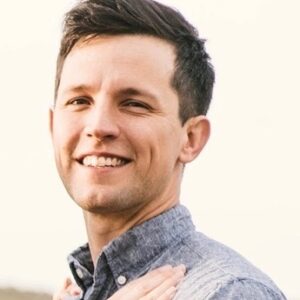 Andrew Green is the Lead Dreamer at RUJA (ruja.org), an organization giving kids in Uganda the freedom to dream big. He loves writing, gardening and running with his wife in Boise, Idaho where they dream of seeing the kingdom of God take root in their own little neighborhood.
PrevPreviousIndia Photo Essay: Untouched by Time
NextBecause of Eagles: Finding Rest in the Trees with Seth and Tori BoltNext