Among the Bajau “Sea Gypsy” People

Photographer Garrett King had been on the move for six months by the time he landed in the Philippines. “When I was invited, I knew this trip was going to be at the very end of a very long run,” he says. “But no questions asked, I said yes—of course I’m going to be there. When those kinds of things are put in front of you, I think it’s God telling you it’s what you need to do.”

In November 2019, King joined a group of visual storytellers to capture the work of child sponsorship organization One Child Matters. The organization, whose motto is “hope in the hard places,” establishes programs where most organizations won’t, either because the danger is too high or the logistics too complex. They educate, nourish, and equip children facing poverty in the areas where others are reluctant to go.

King headed to the Philippines after a long stretch of intense professional travel. He had been from Utah to Guatemala to Japan to Bora Bora, leading workshops and creating content for brands. In contrast, the team’s work with One Child Matters was about “making sure that we were present, and seeing as much as possible.” It was a job he did not take lightly, knowing he was arriving in communities as an outsider with the goal of capturing people with clear eyes, dignity, and compassion.

It was with this commitment to seeing, that the group visited the Bajau people. The Bajau “sea gypsy” community sits on the coast outside of Davao City, but it might as well be a world away. Families live above the ocean tide without sewage systems, born into and dying among trash and waste.

These are the kinds of places where One Child works: places largely forgotten or ignored by surrounding social services, community, and government. In places like the sea gypsy village where daily survival trumps education, they offer opportunities and a way out.

“These kids are fighting for everything they can,” King says. “We just had to observe, because we don’t know what it’s like, and that’s a really humbling experience. We’re not the solution, but we can empathize with them and understand that there is a solution if we all work together.

“I wanted to make sure that I was capturing both the reality of the situation and shining light on the possibility of beauty within the community. Making sure I captured the harshness of the environment. So I captured photos of what the kids do: laughing in the rain, playing with spiders.”

This is what King had in mind—capturing both the harshness and the beauty—when he took the image of a young girl picking her way barefoot through an expanse of waste. She’s holding pieces of trash in her hands, items she’s collected to use or sell. Garrett saw her from a distance and took what would become his favorite image from the trip.

Later, he learned her name was Salma. Using his photograph, the One Child team found Salma in the village and invited her to join the program. Now, King sponsors her. “I have a picture of her on a magnet on my fridge. I see her twenty times a day, every day.”

Salma lives amidst malnutrition and disease, but her story continues those limitations. Though One Child’s work among the Bajau is daunting, as King says, “You’ve got to start. Something beautiful might happen. People can adapt and change quicker than you ever thought they would.” 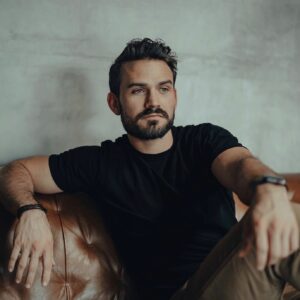