We Become The Stories We Tell: A Reflection on the Attack of the US Capitol

The flag behind the Speaker’s chair commanded the attention of the chamber as I stood on the floor of the US House of Representatives.  We made eye contact, as much as you can make eye contact with a flag, and it seemingly stood saluting on its feet behind the lectern where presidents address the nation. Rows of empty seats where Members of Congress slip their voting cards into boxes and press the desired button for their vote sat listening to the soundwaves of all the speeches that had gone before. It was late on a weekend evening and I wandered through the US Capitol alone. The vacant House chamber hummed the way a conch shell explodes with the sound of breaking ocean waves when you hold it to your ear.

One of the greatest opportunities working as a congressional aide is giving tours of the Capitol to constituents and friends, getting to sit with them on the House Floor, to show them bits of the Berlin Wall in the base of California’s Ronald Reagan statue, and stepping onto the Speaker’s Balcony to take in the sweeping westward view of the National Mall. But in this moment after working late in the Cannon House Office Building on a weekend, I had the entire US Capitol to myself except for the occasional Capitol Police officer. Despite the dysfunction of politics, the US Capitol often feels bigger than the American experiment, which is cliché but true. There’s something represented here that transcends the 435 congressional districts that vote to direct the future of the country. In the video that visitors watch before each tour, the narrator boldly declares, “Congress is where we find our common ground.”

While Congress needs reform for that declaration to be true at deeper levels, the legislative branch still offers the possibility to be a safe space for conversation and governance that would otherwise be settled by war. Before I sat down to write this, a breaking news alert from the New York Times read, “Daw Aung San Suu Kyi, Myanmar’s deposed civilian leader, faces up to three years in prison on an obscure charge of illegally importing walkie-talkies.” Crises such as what currently faces Myanmar offer a powerful reminder: it is vitally important work to keep institutions that foster collaborative governance healthy.

Somehow over the years as a culture we stopped telling stories that challenged us to create a safe space for conversation that leads to understanding and greater common ground. As a former congressional staffer, I know too well how easy it is to twist reality to make it more alarming than it otherwise would be. In moments where we most need connection as a people, the easier path is to write statements that inflame. Statements that  are sure to get press coverage, or write words that make it sound like we are destined to become a failed empire if the other side gets an equal chance to have their views represented in Congress  and contribute to American governance.

“Somehow over the years as a culture we stopped telling stories that challenged us to create a safe space for conversation that leads to understanding and greater common ground.”

Over the years, this “Us vs. Them” narrative has come to define American politics, even among followers of Christ. It’s a story that we repeated often over the years, and eventually the very thing we feared became our reality.

As I saw our fellow citizens break into the US Capitol on January 6, I couldn’t help but think of the years of division that made that moment inevitable. We saw Capitol Police officers attacked—dozens injured, one killed, more lost to suicide—and windows broken, and these images had their beginning in an “Us vs. Them” mentality that came to define political engagement. It was created by narratives in which the other side is treasonous and therefore should not be allowed to participate in the safe space of representative government.

However, “Us vs. Them” politics fails to recognize not only  the greatest American ideal, but also the upward call of the gospel. The Constitution begins with the words, “We the people,” because the American idea is that we can only “secure the blessings of liberty” when we transcend opposing ideals by creating a safe space for them to converse. And when we feel the intensity of inflamed passions, the path forward is always to listen more intently and find points of connection.

“From my view as a former congressional staffer, the attack on the Capitol was the result of “Us vs. Them” narratives that were heard, and seen, and touched, and made manifest time and time again.”

I left my job on Capitol Hill in 2015, and around that time I read First John every morning for a month. The clear declarations about the love of God changed my perspective both intellectually and emotionally regarding who he is. The idea that there is a loving God who came to us so that our joy may be complete is our greatest hope. It can change how we see current affairs. Over the last month, I’ve been reading it again—although admittedly I have yet to make it beyond the opening lines quoted here. They’ve struck me as a powerful answer to the question of how followers of Christ can begin to tend the wounds that divide us, the ones that seem impossible to heal.

From my view as a former congressional staffer, the attack on the Capitol was the result of “Us vs. Them” narratives that were heard, and seen, and touched, and made manifest time and time again. Narratives that we, as broken people, have all contributed to perpetuating. We need to tell a better story. Our joy that could be complete however, begins when we speak narratives that include fellowship—or at the very least, simply dialogue—with our fellow Americans.

“As followers of Christ, the way forward for our country is to continue to embody Christ on earth: to be a force for peace that those around us can hear, see, and touch.”

The life that was made manifest for us two thousand years ago means that when we participate in American self-governance, it’s simply an opportunity to demonstrate the love of God, to feel  and express hope that transcends the moment. Policy ideals and political leaders will always fall short of the abundance of the Kingdom of God, which means that  “Us vs Them” narratives are fundamentally rooted in the lie that one side can achieve a certain degree of perfection. What John wrote about is a history-changing response to that lie: when we feel the tension between the present state of affairs and the Kingdom we know deep down we were created for, our response should not be violence but rather greater compassion for ourselves and for our neighbors. Dialogue, in the American context, is critical because it’s the starting point for compassion.

As followers of Christ, the way forward for our country is to continue to embody Christ on earth: to be a force for peace that those around us can hear, see, and touch. For better or worse, Congress is a reflection of the country, and it can only become a safe space for deeper conversation if we first become a people who value safe spaces ourselves. As much as we believe in “We the people,” it’s ironic that we all learn at some point not to talk politics at family dinners. But changing the narrative in ourselves and in our homes to align with the true narrative of Christ’s compassion for us is the only way renewal can begin, for us today and for the next generation. 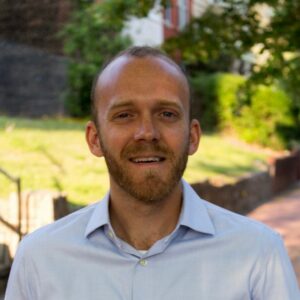 Caleb Paxton is the founder of Liberatus, a nonprofit with a mission to create a culture of American unity for the next generation by producing content, experiences, and leaders that inspire it today. From November 2 through the end of 2021, the Liberatus team is running a crowdfunding campaign on Indiegogo to print Liberatus Volume One, a 200+ page graphic editorial filled with stories that elevate the human experience and blend congressional-level research with contemplative spirituality, beautiful photography, and good design. Its theme is Refuge: advocating for refugees the displaced, and marginalized. To get your copy, back it on Indiegogo.