Bio: Jer Swigart is the founder of The Global Immersion Project, a peacemaking training organization for young adults and individuals. As a modern-day peacemaker himself, Jer seeks to experience restoration in corners of the world where most people turn a blind eye. His experiences have led him to trips in northern Pakistan, as well as the racial injustice in his own community.

Q: How do you define biblical peacemaking in general?

From my perspective, peace is a relational entity. Peace is what can repair severed relationships. That includes the relationship I have with myself, with those around me, as well as my relationship with God and His creation. Some of the biblical imagery that I think is compelling of the idea of shalom is the idea of a vessel being broken and put back together as it once was. Amid my shattered identity, God is not in the work of trying to hide my scars. Instead, God is healing my scars and restoring my dignity, and giving hope.

When I think of biblical peace, I do not think of a God who is putting things back together as they once were. I imagine God as an incredible artist who is re-making the world and making it stronger and more beautiful than when it was broken. The work of peace is the mending of relationships. There are systemic realities in our world today that are the antithesis of peace. It is not just a matter of those awful realities not happening in the world anymore to achieve peace, it is new kinds of systems that guarantee the equity of all people and their wellbeing. It is the idea of Isaiah and Micha’s imagery in the scriptures that every woman, man and child are sitting under the shade of their fig tree. It’s not just that the bad things stop, but it’s a flourishing and living experience for all of us.

Q: Would you say that justice is the act of re-doing those systems of oppression?

In my view, it’s impossible to dissect or disintegrate peace and justice from one another. I think the work of justice is the work of addressing the reality that things are not yet what they could be. I think justice involves truth-telling, it involves speaking power and truth to society.

In my work, one of the things that I’ve recognized is that when there’s something that is broken, one group is calling for peace and one group is asking for justice. So, oftentimes the oppressor is calling for peace, which is their way of saying we just wish that the oppressed would shut up, and absorb the fact that this is the way it is. However, the oppressed in this case are not talking about peace, they’re talking about justice. Their understanding of justice looks like your boot is off my neck and we are sitting at the table as co-creating equals. So I think the work of justice is doing whatever it takes to take the oppressor dynamic and transform it. I think the work of peacemaking is imagining and co-creating around the world that we are dreaming about.

Q: How did you even get involved in biblical peacemaking?

It’s crazy. I was on the fast track to megachurch evangelical leadership. I grew up very antagonistic toward Jesus and Christian people in general. I recall thinking that if God’s people were anything like God, then why would I want to follow him? It was in the context of my undergrad education which was an important environment for me because I questioned everything, that I began to re-examine that belief.

It was an incubator where they weren’t teaching me how to think they were trying to teach me what to think. Despite that system, I began to discover what it is that I do think. It was in the context of that that I discovered a Jesus that was incredibly compelling to me. One that was proven to me that he loved me before I could offer anything to him. I was compelled by Jesus who was radically inclusive, who went to all the wrong places and hung out with all the wrong people. That was the Jesus I encountered in my undergrad in the context of relationships within the community around me.

“I imagine God as an incredible artist who is re-making the world and making it stronger and more beautiful than when it was broken.”

Then, in 2005 in the wake of 9/11, the earth shook in northern Pakistan. I happened to be sitting in a coffee shop reading the front page of a newspaper. I read an article about what was going on in Pakistan, and at the age of twenty-five everything inside me broke open. I knew nothing about Pakistan. When I read the article about a 7.2 magnitude earthquake that ravaged northern Pakistan, with 80,000 people who died, everything inside me compelled me to go. I called two of my mentors and they agreed that it sounded as though Jesus was doing something in my life. Another mentor said, “I think you need to go to Pakistan and I might have a connection that could get you there.”

Within three weeks I had my Pakistani visa in my passport, and I was landing at Islamabad international airport. An armed escort was brought into the airport, grabbed my bags, and  I was driven eight hours north to the epicenter of the earthquake, where I got on a UN helicopter and was flown to the top of the Himalayan Mountains, right in the Tora Bora caves where they believed Osama Bin Ladin was. I spent the next four weeks sitting at a fire with the tribal village elders. I listened to them relay what happened when the earth shook, how many people and buildings they lost, and the supplies they needed for the winter. Then, I would take that information and start negotiating with the United Nations to get those supplies, and the helicopter, up to us so that we could distribute the supplies to those who needed them most.

When I look back on those days spent with the tribal village elders, it was a remarkable experience that I was radically under-qualified for. It helps me understand, from a faith perspective, God is not looking for people who have all the qualifications. He is always looking for available people. I believe availability is a defining characteristic of everyday peacemakers. God is restoring every corner of the cosmos, and my job is to just simply pay attention to where that is happening. If we take the crucifixion and the resurrection seriously, there is not a corner of the cosmos where God is not found and actively at work.

The last day I was in Pakistan there was a set of village elders that came in at gunpoint and it was intense and scary. Through translation around a fire, I began to recognize that these two villages had been in civil war for thirty years and the only place that the helicopter could land was in the opposite village. So, after a four-hour dialogue, I was asked by the Pakistani general to draft a peace treaty and so I took out my notebook and pencil and wrote the agreements that were made. After everyone was satisfied with it, everyone signed it, and the set of village elders that came in with their guns up, left with their guns pointed down. That was the moment when the gospel went HD for me. That experience shaped my research, my studies, and my pastoral leadership. Ultimately, it pioneered the Global Immersion project which raises the capacity of faith leaders to join God in remaking the world. I began to extend my capacity for what it means to wage peace wherever I live. Peacemaking begins where my feet already are. The difference between peacekeeping and peacemaking is maintaining the status quo, without changing anything. Peacemaking is quite disruptive because we are speaking power and change to the society around us. It requires a commitment to building a relationship with people who hold different perspectives. It involves deep humility, experimentation, and risk.

Q: How do you understand the value of risk in places of conflict?

Well, I’ve been shot a couple of times. I believe we all have varying degrees of risk threshold. I think for me, becoming an everyday peacemaker looks like learning to absorb the violence around us on behalf of others. We can point to Jesus as a peacemaker who argued on behalf of those who were oppressed in his society and in his time. I’ve grown to the place in which I’m willing to put my physical comfort and even my physical freedom on the line in certain circumstances. We risk our way into a greater risk threshold. The encouragement I offer to younger peacemakers is to be wise about what risk you choose to walk into.

One of the things I admire about Jesus is that in his commitment to self-sacrifice he was anti-image management. I do not do what I do to grow my platform, and the peacemaking I do has consistently de-platformed me in my Christian circles because I am consistently hanging out with the wrong people in the wrong places. Peacemaking carries the high likelihood that my reputation will diminish in the minds of my communities of origin. However, I think the beauty is that joy and solidarity are found in those places of loneliness and self-sacrifice, and joy and fullness in life are truly found. So, all the costs and risks become less important when we focus our minds on Christ and living our life in the footsteps of His. 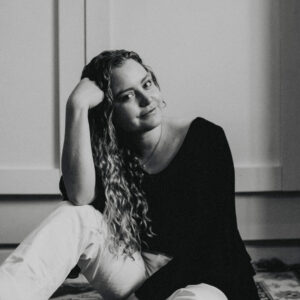 Joanna is a traveling humanitarian photographer & storyteller capturing the stories of those she meets. She grew up in the Middle East in Afghanistan and Turkey for the majority of her childhood and early teen years. Currently, she travels frequently dedicating time to documenting her experiences through her lens and advocating for others to do the same.
PrevPreviousPeace in the Holy Land
NextEcho Park Lake:Next