Our answer will shape the future of the faith.

By now, many of you have read the frequent articles and responses to the latest Pew Research showing the number of people who identify themselves as Christians is declining. Over the last seven years, that number has fallen 8 percent. While no one is surprised that the majority of the decline has been in mainline Protestant churches with evangelicals remaining relatively stable, there was a marked rise in the number of adults who indicate no religious affiliation— up 8 percent from 2007. In other words, there is either a significant numerical decline or people taking the poll simply fail to identify for whatever reasons with any particular religion. They may be spiritual but not religious or religious but unaffiliated.

Some credible researchers have said it may be more an unwillingness to identify with the word “Christian” and the baggage that carries today than a true discarding of the faith. This means people may want to hold to the core theological beliefs but are uncomfortable with how the Christian label has been used to include certain political overtones and practices. Seeing the Christian flag waved by the attackers on the Capitol last year did not help.

This would not be the first time. In fact, it was such a serious issue in the early church that the leadership convened a council in Jerusalem to decide what it meant to be Christian.

“Some credible researchers have said it may be more an unwillingness to identify with the word “Christian” and the baggage that carries today than a true discarding of the faith.”

For some, it was mandatory that all converts observe a portion of the Judaic laws— notably circumcision— and other practices. For the observant Jewish converts it was not only a matter of theology. It was their identity. You could not be part of the people of God unless you honored certain beliefs and rituals. These were, for them, the non-negotiables. Anything else was heresy.

For others, like Paul, those practices were no longer relevant. They were part of the old identity and ones that many wanted to reject. More than that, these practices were seen as an obstacle to true faith and those who insisted on them were mortal enemies to the new believers. It had all the makings of a permanent split in the church.

Clearly, there was a line that had been drawn between those who could not imagine genuine faith without certain essential beliefs and those who had a completely different perspective. This was not an argument over whether to add a contemporary worship service. This divide was at the heart of the identity of being in or out, faithful or apostate, true or false.

I’ve thought about the men who were faced with these early decisions and the wisdom of what they proposed. Even though they themselves were more inclined toward the old way of thinking, they made allowances for what was new. I believe they were looking ahead from their particular tradition and strongly held beliefs and realizing the church was becoming larger and more diverse than a small sect of Jewish believers. I don’t think they were clutching at the past but were figuring out how to deal with the growth and change as best they could. They did not want to lose their traditions or identity but they did not want to send the Gentiles off with no link to their roots.

Looking back on it today, we probably find it curious which three requirements they made on the new believers: No blood. No sexual immorality. No meat offered to idols. Of all the commandments and rules they chose only those. I believe they had thought-out reasons for these requirements as they did not want it to be hard for the Gentiles to come to God so they did not want to create burdens for them. I like to think of these as luggage packed with a few essentials. They are sending the new believers off knowing they cannot follow but they can provide some guidance and wisdom for the journey.

“Maybe the established church has the same role as the council— support efforts that make us intensely uncomfortable in order to reach new people.”

I am not sure how many of us could have given those who chose ways other than ours as much latitude as they did. Would we be as secure as they were, especially if we had to reduce the non-negotiables to just three things? What would we choose? What would we say are the absolutes and the core values about our faith without which we would lose our identity?

Maybe some of us need to propose a new council because we have become— intentionally or not— the church at Jerusalem. There is a need not to burden the new believers and those who are turning to God with our rules and regulations. Maybe it is not necessary to be a traditional Christian to turn to God. Converts can love Christ without the labels and burdens we impose on them— and every Jerusalem has burdens they have come to expect of all true believers. Maybe the established church has the same role as the council— support efforts that make us intensely uncomfortable in order to reach new people.

The Jerusalem church cannot become the Gentile church. There is a shift going on and perhaps the best way for us to respond is to see ourselves as providing light luggage and not burdens. We need to give guidance but not create obstacles. We need to recognize the future of the church is not Jerusalem but the uttermost parts of the earth.

This is an excerpt from “The Edge of the Inside” 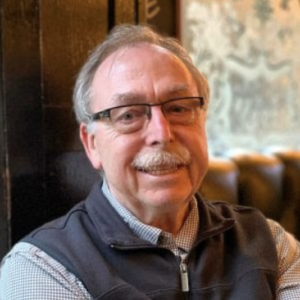 Fred Smith, author of “The Edge of the Inside” and "Where The Light Divides", is a graduate of Denver University and Harvard Divinity School. He is the co-founder of Leadership Network with Bob Buford and served as President for 12 years. Fred is the founder of The Gathering, an international association of individuals, families and private foundations giving to Christian ministries. He and his wife, Carol, have two grown daughters and a son-in-law. They also have three well-loved grandchildren. He writes a regular blog called Fred’s Blog. FB: https://www.facebook.com/wfredsmith Twitter: https://twitter.com/fred2smi E-mail: [email protected]
PrevPreviousReformer Profile: Jimmy Dorrell
NextPatience, Presence & SacrificeNext