This year we’re welcoming advent with a series called Keeping Watch. As we read in Common Prayer, “God getting born in a barn reminds us that God shows up in the most forsaken corners of the earth.” The same holds true today. Many of the stories Nations tells take place in overlooked, unglamorous places. Yet that’s where God has chosen to reveal his kingdom. Every Friday leading up to Christmas, we’ll be posting a reflection about waiting, paying attention, and noticing glimpses of this new order. Join us in preparing to celebrate the incarnation—God with us!

Growing up, Christmas was always my favorite time of year. I loved long summer days and spring flowers, but the Christmas season held a special kind of magic for me.

As I’ve gotten older though, the glitter it once held began to lose its luster. Losing family members, struggles with anxiety, and unreconciled relationships began slowly taking some of the childhood magic.

Three years ago I was standing in the pews I grew up in, sobbing on Christmas Eve, while on the other side of the country Ferguson, Missouri was burning. I looked around at the church that, in many ways, both wounded and healed me as choked out the words to “O Holy Night.”

And I did just that. I fell to my knees, tearfully asking God how would our country ever heal. Begging Him to show me where exactly He was in all of it.

And honestly, as I look around this year, I don’t feel much differently. On both a national scale and a personal one, this year has been one marked by a lot confusion, fear, and pain. It seems that everywhere I turn I see the weary faces of people trying to make sense of pain and heartache surrounding us. Our world feels far more divided than unified. It’s nearly impossible to go anywhere without being inundated with the immense pain that plagues us, here and throughout the globe. On more than one occasion I’ve found myself sitting with God, begging for answers, only to hear a small whisper to my heart saying: “Wait, trust me.”

The place our present day Church is in doesn’t seem all that different than where we find Israel at the end of the Old Testament. In an exile of sorts, waiting. Prayerfully hoping for the promised Savior to come and clean up this mess we’re in.

And in that, Advent is a special time and opportunity to tie our lives to those who came before us.

The world was fractured at the time of Jesus’ birth. The people of God were under the oppressive rule, as Herod the Great reigned and sought malicious control. While the people of Israel had escaped exile in one form by moving out of Babylon, in many ways they still remained exiles in their own country.

Even within their own nation, the political climate was splintered. The Pharisees, the Sadducees, the Essenes, and the Zealots—all Jewish followers of the Law—opposed one another. This resulted in constant friction, often leading to riots, which was greater exacerbated by Roman rule.

The people of God needed answers. They needed a Savior. So they waited—with hope, with resilience—for the promise God had made through prophets before them: that Jesus would come and bring peace.

It often feels like we live in a constant state of waiting. Whether small or big, we are called to wait for the things we long for the most—which feels counter-cultural in a world where both information and daily basic needs are met with more haste than ever before.

As believers we know the power and struggle in waiting for God’s timing, for His hand to move. We wait for justice for those in the margins, we wait for healing and reconciliation in our nation, we wait for love and truth to lead us. We wait and we hope. And we get discouraged.

Waiting, it seems, is not for the faint of heart.

But thousands of years ago God did just as He promised. He came as a man, sending shockwaves of hope to grieving hearts. It wasn’t without uncertainty or complication, but He came. He kept His word to save mankind. Jesus’ birth brought hope and light to a world filled with darkness.

It’s with that same hope of those who have gone before us that we can celebrate today. Not without mourning, nor without confusion of sorrow, because there is freedom and worship as we lament the heartache in our present waiting. But there’s still hope for our weary world.

This Advent season we have a choice to make. We can decide to bury our aches and our fears in tinsel and bows. We can choose to disengage with the season altogether, tuning out the red and green, snuffing out the light with darkness. Or we can stand in the gap—we can mourn for what is and long for what has not yet come. We can rejoice with worn-out hearts. 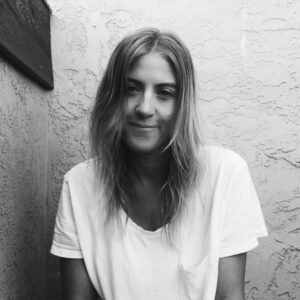 Rachel is a California native with a love for picking flowers and eating string cheese. After eight years working on L.A.’s Skid Row she moved to San Diego where she now advocates for and mentors homeless teenagers under the banner of Young Life. She loves writing in an effort to lend a voice to the often unheard and to give people a place to find hope and belonging. Visit Rachel's Site
PrevPreviousKeeping Watch: Advent, Week 3
NextKeeping Watch: Vital EmbodimentNext