Giving Work and Waging Peace: An Interview with Jessica Courtney

In areas of conflict, peacemaking and creating economic opportunity are inextricably linked

Work is something we often take for granted. Some call it an unfortunate necessity, others call it a curse. Yet what if the decision to work was plucked from your hands, leaving you unable to earn an income no matter how badly you wanted to? How would you cope?

This is the plight of displaced people around the world, including millions of young people in Iraq. In the midst of generational conflict and the worst forced displacement crisis in human history, how can a single person or organization halt the perpetuation of violence and promote peace? And where, exactly, does work fit in?

Following decades of war, the rise and fall of ISIS, and the resulting millions of displaced people within Iraq and countless more across the region, Iraqi youth have known nothing but conflict for their entire lives. Approximately 58 percent of Iraq’s population is under 25 years old, yet there are few sustainable local employment opportunities to match the rising numbers of young job-seekers.

For refugees and internally displaced people, strict work restrictions make it nearly impossible for millions to survive on anything but aid—highly problematic considering the UN now estimates the average period of exile to be 26 years. False hope, planted by corrupt leaders and regimes over the years, has resulted in frustration and anger. It’s left an entire generation feeling that they have no future.

That is a recipe for unrest.

When considered as part of a larger system of conflict, many researchers point to the lack of work/economic opportunity as a root cause in the perpetuation of violence and displacement. Systemic unemployment can lead to civil discontent and local or regional instability, which provides opportunities for political imbalances, uprisings—or worse—extremist groups to fill the void. This can escalate into conflict, further displacement, and diminished access to education, healthcare, social capital (trust, community networks, etc.)—and so the cycle perpetuates itself.

That is the current state of Iraq, and it’s within this context that Preemptive Love Coalition operates. While seemingly hopeless at first glance, Preemptive Love enacts holistic methods to untangle the knots of conflict, from humanitarian aid to peacemaking to—as Jessica shares below—job creation.

Jeremy and Jessica Courtney in Iraq, 2016

Preemptive Love has promoted job creation for years as part of their mission to unmake violence and end war, and in 2017 they launched WorkWell: the first program of its kind to train a new digital workforce in Iraq. WorkWell gives locals, refugees, and internally displaced people access to digital work so that they can earn an immediate income wherever they are through online microwork and freelancing. This growing vetted and trained workforce is unlike anything Iraq has seen—and it’s causing the international community to take note.

After all, if workers can’t access work in local economies, why not introduce them to the global digital economy?

In Iraq, connecting individuals to economic opportunities not only meets the physical needs of at-risk populations; it also transforms the identity of individuals the world deems victims or enemies.

How does bringing digital work to local and displaced people across Iraq contribute to a more peaceful future?

Conflict rises in countries where [people] have more to gain than they have to lose. So, if you don’t have employment, if you can’t feed your family, if you feel like you don’t have respect or an identity that people will respect, then you’re going to have to fight for all of those things. Conflict starts to end when economies rise to a place where the people have a lot to lose [by engaging in conflict].

Young men joined militias mostly because they didn’t have income for their families, and this was a way for them to have incomes. Then it gets spread across the country, to fight and die for people who they think are opposed to them. Then these families are still left poor, there still are many young widows left behind with children and then there are soldiers who now have been maimed and are also scarred. They have lost an arm, they lost a leg, and they don’t have any way to provide an income.

If you study households in Iraq last year, you’ll see, especially in the south, that there are a lot of uprisings: there are people coming against the government and saying, ‘Why aren’t you taking care of us, after we took care of everyone else?’ The [Iraqi] Reconciliation Office is saying to us, ‘Please come and bring this [digital work] opportunity to the soldiers and their widows [too] so that they have a way to make money, and they have an alternative to fighting.’

What is the broader impact of giving digital work to forcibly displaced people?

I think the broader impact is the ability to work when you’re not allowed to work somewhere else. Most of this is actually a temporary solution for people. It helps to bring purpose, it helps to bring income. When we’re working with displaced people, especially those who are in a camp, we start to see the environment of the camp change because people start to belong to something other than being a refugee.

I think a lot of the times the work we do in WorkWell is just giving that second identity. We don’t consider people ‘refugees.’ We don’t consider [them] ‘displaced people.’ They come in as an individual who has the potential for work. And they start to identify with that vocation. They say, ‘I’m going to WorkWell. My training came from WorkWell!’ And it’s just a brand-new identity for them.

I think that’s super important—maybe more important than the actual work that they are doing—it’s that identity shift because it leads to the kind of confidence that helps them get jobs beyond what they’re doing in microwork. If they even have just one or two microwork jobs that they have done for an outside company and that gets on their resume, then it helps to boost the work that they’re able to find after that. It’s our hope that we can provide for the long-term to people. I think right now the benefits that we’re seeing are mostly in that identity, confidence and in that initial resume building.

“Conflict rises in countries where [people] have more to gain than they have to lose.”

Have you encountered a major restraint in bringing digital work to WorkWell workers?

Iraq and Syria both are in a really unique position right now where I can’t even go online to buy clothes for my kids to be shipped to my husband in the States. Or for him to bring clothes to us when he travels because there are so many [digital] geographic restrictions.

Because of international banking laws, because of the geo-restrictions placed on Iraq, we’ve gone about as far as we can go unless governments decide to intervene… there has just not been a way to break down those international barriers that come into place because people don’t trust you.

This seems like an invisible injustice that most aren’t even aware of. When it comes to trust, what do you think is at the root of this trust deficiency?

I think it’s the stories that we have been told for the last 30 years. I was just starting high school when the first war in Iraq happened. When you think about the people my age who are leading companies across the Western world, that’s all they know. They’ve known the Middle East as their enemy. And then when 9/11 happened, that is the really important baseline for all of us, and the second war in Afghanistan. There’s not a person in the Western world who doesn’t know someone who died because of that. Not just in the [Twin] Towers of course, but in the follow-up. And the changes for us from that moment until today affects how we do business.

When I was a child, I really loved James Bond movies and, in every action-based film, the Russians were enemies—and no one wanted to work with Russia. And I grew up being really fearful of Russia. Well, that flipped after 9/11. Every one of those TV shows and movies is now about the Middle East.

So, if you question everyone who wears a head covering or dresses different than you, or goes to a mosque to pray because that’s what you’ve grown up learning, then it’s going to be hard to flip that switch. I think it’s going to take some time and a lot of proving on this side of things before that trust starts to be built.

What do you wish the rest of the world knew about the individuals you work with in Iraq?

I just wish that the world could know how motivated [WorkWell’s workers] are to be a part of the online economy. That they are not just sitting in their tents waiting for someone to bring work to them. They’re extremely motivated, hard-working individuals who just want to provide for their family. And [digital work/microwork] could be the key that unlocks that possibility for them, because it can be done from all over the world. So, if you start to make enough money that you can pay for your own food, for your own housing, your own child’s education, then in the long-term it lets them become contributors to society instead of society and government needing to contribute to them, and that’s what they want.

“They come in as an individual who has the potential for work. And they start to identify with that vocation.”

Regardless of where you were born, what religion or nationality you belong to, one thing is certain: we are wired for work. Leilah Janah, the founder of digital work initiative Samasource, writes, “When you ask people living in desperately poor regions whether they would prefer to receive aid or work, they choose work, because work gives them access to necessities and the long-term ability to procure them without outside help. In addition, work gives them what we in the West prize so highly: agency.”

From a biblical perspective, work is a good, God-given endeavour. We discover first in the story of Adam, who found great satisfaction with the tasks assigned to him, and throughout Scripture how meaningful work enhances human dignity.

We work to carve out a brighter future—one day, one job, and one task at a time. We work, as John Mark Comer describes in his book Garden City, “to bring order out of chaos, to bring harmony out of discord,” and ultimately to “actively partner with God in taking the world somewhere.”

Where there is no work, there is often no hope. This narrative can be found in populist uprisings as well as the ascent of extremist groups throughout history. And without hope, we—as Jessica has seen firsthand—have far more to gain through violence than we have to lose, and the hopeless cycle of conflict continues.

Reformers like Jessica and Jeremy Courtney and organizations like Preemptive Love Coalition understand the connection between work and hope. They strive to strengthen it and wage peace, one job at a time.

Photos of Iraq by Joel Parker and Janssen Powers. 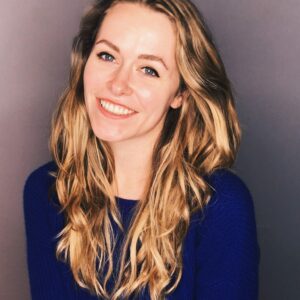 Giselle is a Seattle-based writer and founder of the blog See, Hear, Explore. With a masters degree from the University of Edinburgh, passport stamps from 50+ countries, and a heart that beats for the marginalized, she is passionate about finding and telling impactful stories from around the world.
PrevPreviousBibles in the Barricades
NextEpisode 005 | Jacqueline IsaacNext