In 1962, Sister Mary Corita walked into a West Hollywood gallery to look at paintings of Campbell’s soup cans. Leaning up against the wall at eye level, the paintings had the same colors and shapes and branding as the original cans with only soup names to tell them all apart. Was it a gallery or supermarket? A painting or an advertisement? Andy Warhol was democratizing art in new ways, and it sparked an epiphany for this artist-nun. “Always be ready to see what you haven’t seen before,” she said. It’s how we “make contact with what is really there, uncluttered by old thoughts and prejudices.” If paintings of soup cans could be art, then what about the art of the church? The same year, Pope John XXIII began Vatican II, a reforming movement to “open the windows of the church to let in some fresh air.” Church worlds and art worlds were opening new doors to the ordinary. What would happen when this artist-nun walked through?

Corita was already an accomplished artist. She was building up layers of thick color and texture in her screenprints of biblical scenes, and she even won an award from the Los Angeles County Museum of Art for the lord is with thee (1952), a print referencing the Annunciation, the rosary, and the Virgin Mary. But after seeing those soup cans, you can see a dramatic shift in her artmaking. She went back to her print studio and started looking at another common food: sliced bread. In wonderbread (1962), she printed twelve bright wobbly circles on the page based on the packaging. It reminded her of the Eucharist, and copying it twelve times evoked the liturgical year. It’s a playful meditation on sacred time, wonder, and communion—a different kind of bread inspiring our imaginations year after year.

But pause here a minute and hold these two images in your mind: a print of the Virgin Mary and a print of bright blotchy circles. Can they both be religious art? Sister Corita and a community of nuns at Immaculate Heart College said yes. But when they  threw open the windows of the church looking for some fresh air, some leaders of the Los Angeles Diocese responded to her art with distrust and criticism—a response that ultimately contributed to Corita’s decision to leave the order.

Of course it’s easy to see how the lord is with thee is religious art. It illustrates a religious scene and we can imagine how it might function within a worship setting. It makes sense on Sunday morning. But if we saw wonderbread hanging behind a pulpit, we might scratch our heads. That confusion is natural, and it comes from a lack of knowledge. Church folk often just don’t know that the art world has a recent history of expanding what it means to make and enjoy art. Art doesn’t just have to illustrate something. The process and materials can become part of the meaning. That’s the key to wonderbread and all the work that emerges from Corita’s studio. She became interested not just in depicting scenes from the Bible but answering this: what might happen if a Christian imagination engaged the world around us through the arts? That art might look less like an illustration from a Children’s Bible and more like exploring seeing the stuff of life—even a bread bag—as dialogue partners with mysteries of faith.

Let’s look at another example. At first glance the two silkscreens (give the gang) the clue is in the signs (1966) and (our best) reality proves very little (1966) don’t illustrate theology or scripture. You wouldn’t see them  hanging in a sanctuary next to the altar, but I’d say this is deeply Christian work— the material result of humility and a reforming imagination.  Corita’s bright colors and blocky warped letters spread across the page in all directions. We’re not looking at a message as much as the visual impression of letters, and everything folds on top of one another in a dizzying texture of primary colors. Can you tell what the big letters say? “Give the gang our best,” a common informal greeting between friends at the time. But this nun found the phrase in a soda ad in a magazine. And then there’s the smaller handwritten notes from the nun herself, this time quotes from her priest friend Daniel Berrigan:

“She became interested not just in depicting scenes from the Bible but answering this: what might happen if a Christian imagination engaged the world around us through the arts?”

The clue is in the “signs” which reveal themselves to the listening heart, and so reprove our unmortified tamperings. Such signs lead to further questions, in the nature of things. The road does not reach its end when an answer is near; it forks out in two or five or a hundred new directions.

Reality proves very little: it indicates a great deal, by way of epiphany of signs which always accompany mystery like the influence cast off by radioactive material. Knowledge therefore has all the imprecision of involvement, rather than the “clarity and distinctness” of logic.

Father Berrigan is talking about how things mean, how communication happens in a media-saturated world. By way of “epiphany” (remember the Annunciation?), we are led into deepening and expanding questions about the nature of all things. Whew—that’s some whiplash for you. You could say the advertisement deforms relational words into marketing copy to sell drinks. But Corita  re-forms them back into something relational. She brings those words back onto the page, tweaking and playing with them and putting them in dialogue with the words of a priest. The phrase “give the gang our best” started as a greeting, flattened into an advertisement, and through a creative process it can cause us to think about generosity and the unexpected grace that can flow between friends. What does it mean to give to those we care about? What does generosity look like outside of the decaying habits of capitalism? What exactly is our best and how do we access it? Artworks that illustrate biblical scenes or theological ideas are good, but do you see how rich this other approach can be? These prints are records of her curiosity, a dialogue between public space and her own prayerful disposition, and by looking at her artwork, she invites us to retrace her steps. These prints don’t depict a Christian  scene, but they’re the end result of a distinctly Christian creative process and a reforming imagination. And we can join in—as artists, as appreciators, and as people.

And Corita wasn’t just making prints. Art is not just the object for sale on the gallery wall. Art is about community, about inspiring people to see the world in fresh ways, and a mutual curiosity about what might happen when we make things together. Not only was she teaching and making prints, she was also in regular conversation with people beyond the traditional boundaries of the church. She brought filmmakers and thinkers to the school to lecture and befriend students. People like Alfred Hitchcock, Charles and Ray Eames, Buckminster Fuller, and many more. And when the school asked her to lead the annual Mary’s Day parade, she reformed that too, turning a suffocatingly serious liturgy into a joyful and expressive parade complete with handmade flags and cardboard signs.

All of this came from Corita reforming the church’s vision of the arts. Opening the doors and windows and letting in fresh air. But it was too much for the Diocese of Los Angeles. Threatened by her attention and provocative art, they put so much pressure on her and the nuns of Immaculate Heart College that the religious order changed their relationship to the church and became an ecumenical community and non-profit. Many decided to leave their habits behind entirely, including Sister Mary Corita, who lived out the rest of her days as Corita Kent in a quiet home in Boston. It was only six years after she was inspired by a fellow Catholic artist’s paintings of soup cans. In a late interview, Corita reflected on a maple tree growing outside her window:

“It seems a great new stage for me—whether it will ever be recognizable by anyone else I don’t know, but I feel that great new things are happening very quietly inside of me. And I know these things have a way, like the maple tree, of finally bursting out in some form.”

As she settled into a new and solitary life, she continued  her trademark printmaking and also started painting introspective watercolors. She still stayed in touch with the Immaculate Heart community and even experimented with “Evenings with God,” a series of “happenings” that brought artists and songwriters and theologians into unexpected conversation. Where were these new forms taking her ? I’m not sure she ever found out, since she tragically died early from an ongoing cancer diagnosis. It’s an unanswered question, in a way. Learning from her life and art, I have to wonder what might have happened if the church supported her as she searched for those new forms. What might happen now if churches followed Corita’s lead and befriended artists in their own communities? What new creative worlds would we discover together? What might burst into bloom? 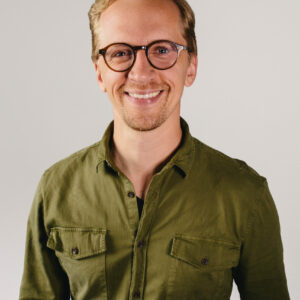 Michael Wright is a Minneapolis-based writer focusing on art, spirituality, and religion. He's a story strategist for Open Book, and he writes Still Life, a weekly letter on art and spirit. Find him on Twitter and Instagram at @bymichaelwright.
PrevPreviousAnnelise Jolley
NextCultivating a Beautiful FutureNext