The historical reformer remembered for his elaborate, absurd, prophetic justice

A naked madman halted the king’s procession on packed snow, standing in the middle of the road with eyes blazing behind a nest of overgrown hair. Blood dripped from his clenched fist. Pedestrians stared in rapt attention. It was an impasse: on one side sat the head of Eurasia’s most powerful empire. On the other was a famous lunatic.

The emperor was Czar Ivan IV “Grozny”—more commonly known as Ivan the Terrible. He was flanked by riders in black with severed dog heads dangling from their mounts: the Oprichnina, the Czar’s paramilitary force. Part Nero, part Henry VIII, Ivan tortured rivals without hesitation and intervened in the Church without restraint, executing the Bishop of Moscow, removing an archbishop, and slaughtering many monks. He had personally murdered his own son in a fit of rage after beating his pregnant daughter-in-law.

“Fools for Christ lived difficult lives in the peculiar, upside-down Kingdom in which the first become last, and the last become first.”

Yet the terror of Russia did not dare trample the beggar who stood in his way—he was off limits. The entire population of Moscow hung on the beggar’s every word and action, revering him as a prophet. His rebukes were beyond critique. This was Basil, the “Fool for Christ.”

Yurodivy, or “fools for Christ” followed in the footsteps of John the Baptist as men and women who had “become fool[s] so that [they] may become wise,” (I Corinthians 3:18), who renounced the world, its treasure, and its rules to become disciples of Christ (Luke 14:33). Medieval Russians were open to divine wisdom and miracles coming from the “simple”—God using the weak and foolish to shame the strong and wise (I Corinthians 1:27). Fools for Christ lived difficult lives in the peculiar, upside-down Kingdom in which the first become last, and the last become first.

Basil extended his hand to reveal a strange offering: a handful of raw beef. More suggestive was the timing. It was Lent, a time when Christians abstain from meat.

“Why do you offer me meat? I am fasting like any other pious Christian!” the Czar replied. Many had been put to death for far less, but Ivan, too, revered Basil as a holy man. It was rumored he even feared him.

“God prefers that you devour meat instead of innocents,” Basil stated simply.

And with that, a frail, naked beggar reminded one of the most powerful men in the world that he was not above God’s law. We don’t know exactly what practical effect this rebuke had on the monarch or his treatment of his subjects. Legends tell of a repentant Czar, but it’s hard to know for sure what resulted. The Czar was unpredictable in his own right, often vacillating between repentance and cruelty, himself the victim of a traumatic childhood.

The impact of Basil the Holy Fool is perhaps best measured by how he’s remembered in the Russian mind: by his thirst for justice and his call to awaken from spiritual complacency and hypocrisy. This call was directed frequently and acutely toward one of history’s most brutal dictators.

Basil and the Czar had a complicated relationship. Basil possessed unique prophetic knowledge, at one point rebuking the Czar for letting his mind wander during church, listing his daydreams in exact detail. For this and other reasons, the Czar respected Basil, showering him with gifts, all of which Basil promptly gave away to the first needy person he met.

Basil had been a guest at Ivan’s table many times, where, clothed in rags, his behavior was as bizarre as it was miraculous. In one instance, the holy fool received wine, and when everyone raised their glasses to drink to the Czar’s health, Basil threw his over his shoulder. He asked for more, then immediately threw it out again. He repeated this a third time. When asked the meaning of his actions, he replied “I’m putting out a fire!” All were baffled. But not long after, word reached the Czar that 350 miles away, the city of Novgorod was ablaze. Despite the fact that Russian cities at the time were built almost exclusively of wood, the fire was miraculously contained, and witnesses claimed to see a frail old man darting among the flames to put it out.

“The impact of Basil the Holy Fool is perhaps best measured by how he’s remembered in the Russian mind: by his thirst for justice and his call to awaken from spiritual complacency and hypocrisy.”

Many miracles are attributed to Saint Basil, and many carry apocryphal elements. What is certain, however, is that he lived the life of an outsider in every regard. Sixteenth-century Russia was a pious place, but it was also transitioning into full serfdom, where the wealthy and well-born ruled with iron fists. As an outsider to Russia’s hierarchies with a reputation for holiness, Basil was able to break the rules of civil society for Christ’s sake, and confront the hypocritical piety of the rich.

He often shoplifted to give to the poor, earning many beatings in the process. As people realized that he stole for charity’s sake however, all that he took came to be seen as alms selected by divine providence. He could be found outside of taverns, praying for those enslaving themselves to alcohol inside, or fighting demons outside homes. He was hopeful for every living soul, believing that there was good within even the most wayward individual, and became something of a safe counselor for members of every rank in society.

A wealthy merchant once tried to build a great stone church in Moscow, only to have the stone arches collapse three times. There was no rational explanation for these collapses, so the merchant consulted the beggar saint. Basil directed him to Kiev, to a holy cripple named John who lived there. John was found rocking an empty cradle and weeping.

“For whom do you weep?” asked the merchant.

“For my beloved mother, who was made poor by my birth and upbringing. I rock this empty cradle to repay her—though no man can repay their mother for her love.”

The merchant’s soul became heavy. These words were meant for him: his own mother was blind, and he had cast her out of his own home when she became burdensome. He wanted to make a grand show of his dedication to God, but neglected to care for his own family. The merchant rushed to Moscow and found his mother, begging her forgiveness and bringing her home to care for her. Only after caring for his own mother was the merchant able to care for a monument to God; the church was built without further incident.

Basil was known to rebuke those who gave alms to buy God’s favor, but he did so lovingly, going to great lengths to heal instead of punish. While it is tempting to categorize Basil as an obscure class warrior, his concern was truly for all, not just the poor. One anecdote records him giving a significant sum of money to a foreign merchant who appeared wealthy. What no one knew was that the merchant had lost all his money in Moscow. He was unable even to get home, and unable to beg as his only remaining possessions were the expensive clothes he wore. Basil gave him just enough to return home, praising God.

Elaborate, absurd, prophetic justice was the prevailing theme of Basil’s life. He left behind no writings, but instead lived his life as a sort of parable, heckling the powerful and oppressive as bad actors in an amateur play, while praising a heavenly King clothed in rags. Yet when Basil eventually died in 1557, the Czar himself was among the pallbearers who labored to bring his emaciated form to its eternal resting place: the cathedral now known as Saint Basil’s.

The colorful, many-domed cathedral in Moscow’s Kremlin was originally built to memorialize the Czar’s conquests in Kazan. That legacy has been overshadowed by a holy beggar, a prophetic voice of conscience clothed in rags and righteousness. Russia’s most recognizable landmark now memorializes the impoverished fool buried there, and Basil still stands in the Russian mind as the benevolent, prophetic counterpoint to Ivan the Terrible’s reign of terror.

There is a symmetry in this history of two madmen: one was paranoid and violent, the other was carefree and giving. One wrote religious poetry while commanding the torture of his rivals, the other was borderline incomprehensible and a help to every corner of society. Ivan found misery in palaces while Basil found joy in suffering. One declared himself Caesar, instituting the title of Czar, while the other declared himself a servant, continuing the institution of one in the wilderness crying: “Prepare the way of the Lord; make his paths straight.” 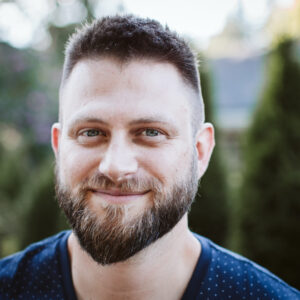 Kevin Walthall lives in the Pacific Northwest with his wife, daughters, and goldendoodle. He gardens when he can. If he could only speak seven words, they would be 'you, I, love, thank, strive, hallelujah, life.' He would be better off speaking only one word: 'Hallelujah.'
PrevPreviousNations Presents: Mark Foreman
NextBefriending DarknessNext